''The gold sovereign is the only coin in history to be minted in five continents across the British Commonwealth. We look at the mints and markets that produced and traded this remarkable coin.''

‘The sovereign holds a special place among gold coins,’ says Andreas Afeldt, managing director of The Coin Cabinet. ‘Its history and position as the only truly global coin minted in five continents makes it unique.’ For insight into why the sovereign is the world’s most traded collectable coin, we look at the history of the Royal Mint’s branch mints in Australia, Canada, India and South Africa.

One of history’s greatest gold rushes began in 1851 in Bathurst, New South Wales, soon followed by larger finds in Ballarat and Bendigo in the new colony of Victoria. Hundreds of thousands of prospectors from Australia and around the world flocked to the goldfields to seek their fortune, resulting in large quantities of unrefined gold entering circulation.

In response to the growing threat to the Australian colonies’ official currencies, the New South Wales government sought British approval to open a branch of the Royal Mint.

Opening on 14 May 1855, the Sydney Mint (illustrated above, in 1872) produced the first Australian sovereigns, the first outside the UK. These had a unique design by the English engraver James Wyon (cousin of the great William Wyon, RA). His portrait of Queen Victoria was not well received so William’s son, Leonard Charles Wyon, was commissioned to engrave a new portrait for the 1857 release.

As a result, the James Wyon type is very rare due to relatively low mintages, and rare in higher grades as a result of harsh circulation conditions. The Leonard Charles Wyon type proved popular and was used until 1870.

Due to the high demand for gold coins, the decision was made in 1871 to open another Australian mint. The Melbourne Mint opened the following year, and from this point on, Australian coins bore the same design as British sovereigns, with an additional identifying mint mark — ‘S’ or ‘M’ — in the lower section of the reverse.

Dies for these new designs bearing the date 1871 were prepared in London and left Southampton on 30 September of the same year. However, after being transferred to the steamer Rangoon on 1 November, the ship hit rocks on the south-west coast of Sri Lanka. Despite its fate, all the ship’s passengers and a small number of packages were saved. The 1872/1 overdate* was created by the Danish-Australian engraver Julius Hogarth, using at least one of the 1871 obverse dies rescued from the wreck. This is an extremely rare variety  — and the story surrounding the dies’ ill-fated journey to Australia adds significant collector value.

*Overdates are rare, as mints often continued striking coins with the old date into the following year until the die broke. Many had different policies and processes for recording mintage figures and rarely specified dates or types in a year. The 1872/1 sovereign overdate is the only recorded overdate for the entire Melbourne series. 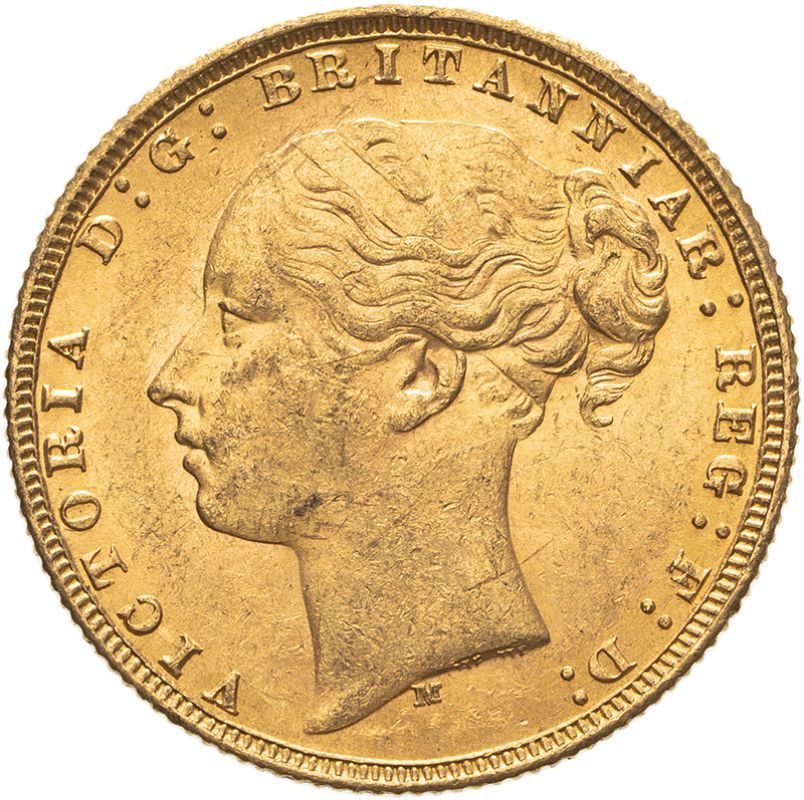 A new design for the sovereign

The shield type sovereign was discontinued at the London mint in 1874, after a period of production alongside the new design, which used a slightly modified version of Benedetto Pistrucci’s iconic St George and the Dragon design. The mint mark on the St George type sovereign is placed on the obverse, just below the bust.

Australian mints continued to strike the shield type until 1887, apparently due to its extensive use in trade by Chinese merchants, whose influence spanned Australia and the Asia-Pacific. The merchants’ preference for shield sovereigns over those depicting St George slaying the Dragon is thought to be related to the mythological significance of dragons in China, and their symbolic connection to the emperor. 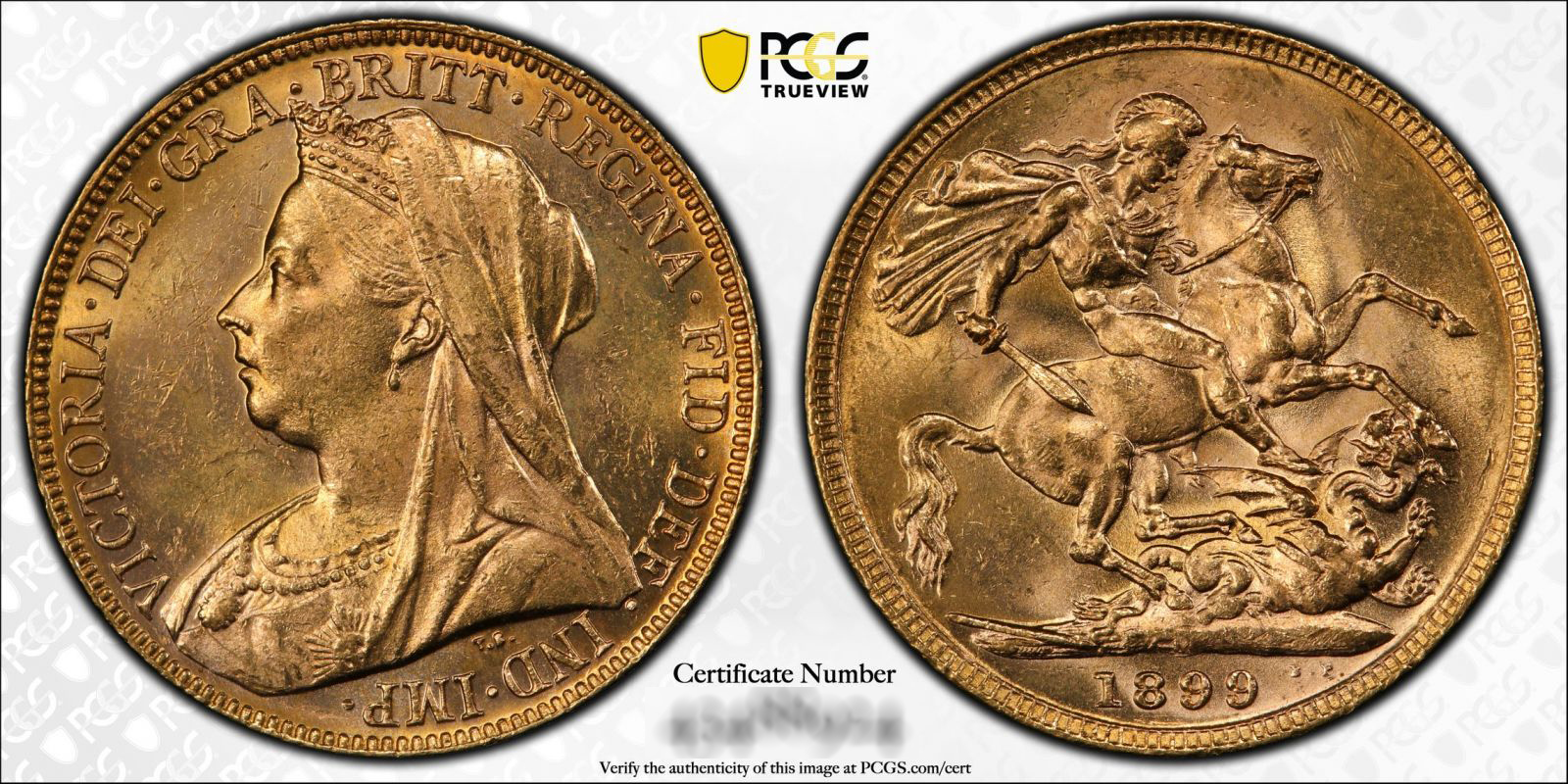 The last Australian mint to be established was in Perth, Western Australia. Opening on 20 June 1899, a relatively small mintage was produced in the first year, using Queen Victoria’s last portrait by Sir Thomas Brock. On this type the mintmark ‘P’ is placed in the exergue line on the reverse, beneath the dragon.

These coins are all commonly found on the market, but high grades of MS63 and above are rare.

At the turn of the 20th century gold discoveries in Yukon saw the Canadian government request British approval to strike sovereigns at a local branch of the Royal Mint in Ottawa. After some delays, building commenced in 1905 and the first Canadian sovereigns were produced in 1908 with the mint mark ‘C’.

This first date is one of the few rarities of the Edward VII sovereign series, as a mintage of just 633 coins was produced, in a satin proof finish. The dates 1909 and 1910 also have low mintages of fewer than 20,000, leaving most collectors satisfied with acquiring just one of these dates to represent the type.

The reign of George V (1910-36) saw healthy mintage figures overall from all the subsidiaries of the Royal Mint, including those established in Bombay (now Mumbai), India (for just one year, 1918; mint mark ‘I’) and Pretoria, South Africa (from 1923; mint mark ‘SA’). The political and economic upheavals of this period, however, resulted in extraordinary measures being taken by central banks, which affected gold coins as reserve currencies. This created some of the greatest rarities of the entire sovereign series.

The 1917 George V sovereign is considered incredibly scarce. Minted the year Britain was forced off the gold standard, most were melted down to help pay off Britain’s war debts to the USA. In the six years following the end of hostilities, great rarities were created in Australia as the pound sterling dropped in price relative to the value of a sovereign. In December 1920 the intrinsic value of the gold in a sovereign stood at 30 shillings while the nominal value of the coin remained 20 shillings.

The 1920 Sydney Mint sovereign has a special story to tell. Around 360,000 coins were minted in January 1920 but dated 1919, as there were no plans to produce more that year. However, the prominent New South Wales politician and trade unionist Jacob Garrard ordered an additional group of sovereigns as gifts in celebration of his golden wedding anniversary on 15 April 1920.

Little did he know that this would create the most important rarity in the Australian sovereign series. The four coins that have since surfaced can all be traced to Garrard’s immediate family, with each selling for record prices of £500,000 and more. 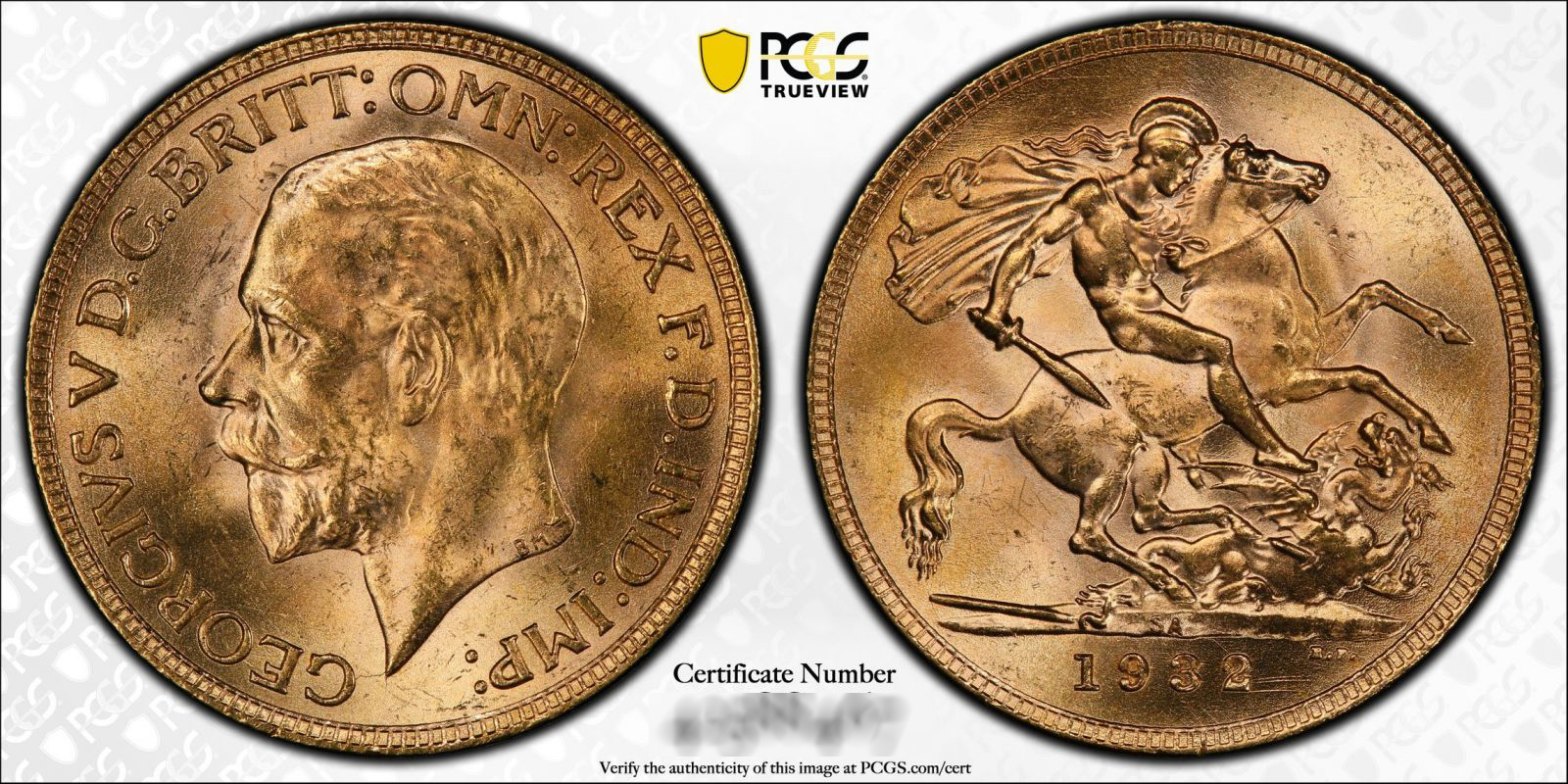 The final branch of the Royal Mint was established in Pretoria, conveniently located near one of the world’s largest gold deposits in the Witwatersrand Basin.

By 1926-30, production was more than £10 million worth of sovereigns per year, but in 1931 the Bank of England abruptly took the decision to leave the gold standard, leaving the currencies of countries trading in sterling pegged to sterling instead of gold. The last sovereigns of the British Commonwealth were struck in Pretoria in 1932, where production briefly continued to service private domestic demand.

‘The history of the sovereign is intertwined with the story of Britain and its empire,’ notes Andreas, ‘their allure isn’t just for the incredible variety and two centuries of modern production, it’s for the storied history behind this small but incredibly powerful emblem of 19th-century globalisation.’

Read more about the Commonwealth coins

Una and the Lion from the Royal Mint

A brief history of the gold standard

Before the advent of paper money, coins were the primary medium of exchange. Usually these coins had inherent value,...

The Who Collection from the Royal Mint

The fourth part of the Royal Mint’s Music Legends series, The Who Collection celebrates the legendary rock ‘n’...